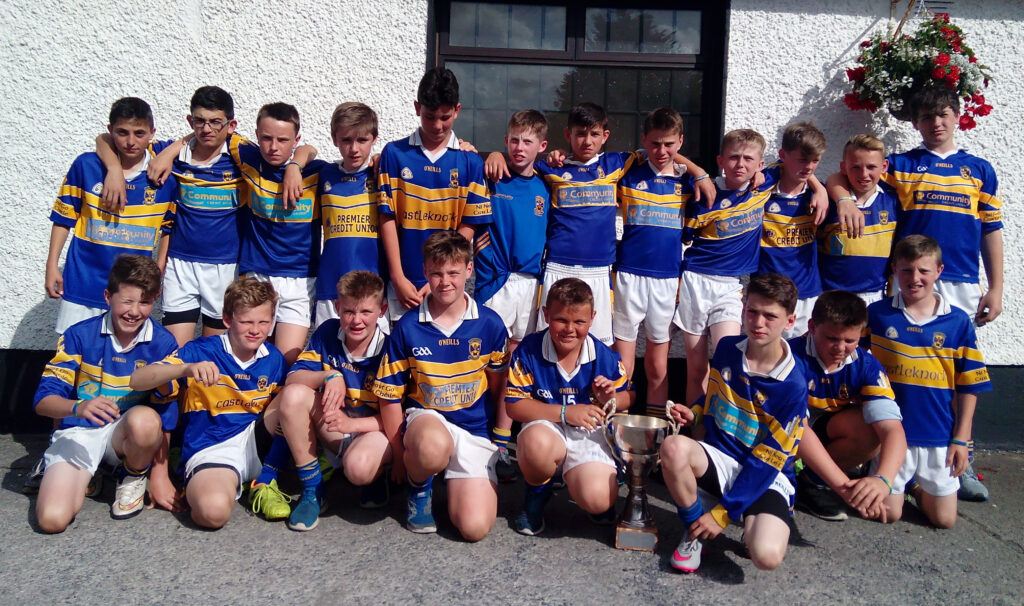 Our first match was against the hosts – Whitehall, it was a tough first few minutes with both teams getting to grips with the ground only style of hurling but we went into the break 0-2 to 0-1 up. We started the second half with an early goal and followed shortly with 2 more points, winning the match 1-4 to 0-1.

Next up were Naomh Barrog, we conceeded an early goal and it looked as if an upset was on the cards but the lads fought back to end the half 2-1 to a goal up. The 2nd half was tight as Barrog came back but we ended the game 3-2 to 2-0 up. There was a well earned break where the kids and adults were treated to food and drinks in Whitehalls clubhouse.

We had qualified for the Division 1 winners final series of matches along with Faughs and Clontarf who had both topped their respective groups. First up were hurling only club Faughs, our lads shot out of the blocks scoring 1-4 before conceeding a goal at the end of the first half. The second half expected a backlash and credit to Faughs they fought hard but our boys hurled well to win 3-5 to 1-2. Next up were Faughs v Clontarf, the latter team started stronger scoring 1-1 to 0-1 up to half time. Faughs needed to up their game to progress, they fought back hard scoring 1-1 to 0-1 ending the game in a draw. This eliminated them and Clontarf needed to beat us to win outright.

The lads were in superb form in the first half, showing great ground hurling skills and in the 2nd quarter dominating the air game, we ended the half 4-2 to 0-0. Clontarf are a fine side and we new that they would come back hard so we upped our game scoring 3 more goals in the ground quarter. We edged it out in the final quarter scoring another 2-1 to 0-1. Great credit to Clontarf, they fought till the end and showed fine skills.

The Castleknock Boys showed superb hurling all through the tournament and are a credit to their club. They go home with the PJ Troy Cup for the 1st time ever.

Great thanks to Whitehall Colmcille & The Troy Family for organising a superb tournament and for being great hosts. The lads & parents were treated to Feile like hospitality!

Many thanks to Coaches Liam O’Flannagain, Terry Buckley, Philip Bohan, Johnny Murphy, Joe Fagan & Colm Deehan for all their work throughout the day.