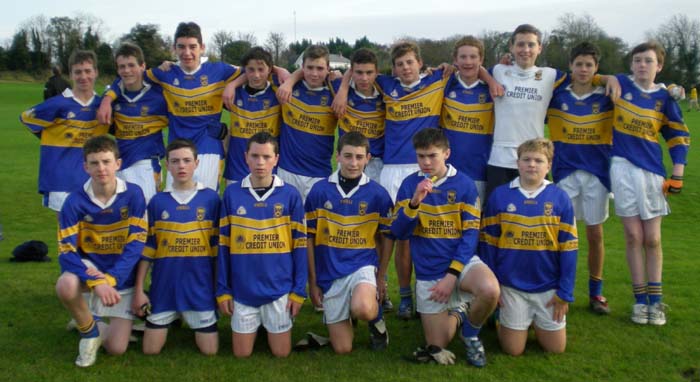 What a year 2007 has been for Castleknock’s U14A team !!. The season has now come to an end from a competitive perspective and the team have achieved a very notable double in winning both the Division 1 Hurling & Football Leagues.

So a year that started with a challenge match in hurling on a wet & cold Sunday morning in January in Naas to countless dark nights training in the Phoenix Park this team has had fantastic success. The success is down to the determination within the team to succeed, they are a team that by and large have being playing together since they were Under 7. They work extremely hard on the pitch during games and have an almost 100% record in training attendance. The team has a combined strength that far outweighs the sum of the individual players.

Looking back over the year it is hard not to firstly touch on Feile: U14 is the age that every team in the Country competes in “Feile”, Feile comprises a hurling competition and a football competition, initially run at local County level, with the winning teams going on to represent their County at National Level. The competition is for both boys and girls and is split into five divisions to cater for all levels.

Castleknock had a fantastic run in the Dublin Feile Division 1 Football competition, they qualified through the group stages to go on and win a magnificent semi final against Ballymun Kickhams only to lose out narrowly in a very competitive game against a very good Raheny side. Raheny then went on to be marginally beaten in the All Ireland Féíle final themselves.

Two weeks later the team competed in the Dublin Feile Division 1 Hurling competition and made no mistake this time by getting the better of Ballyboden St Enda’s in the final. They then went on to represent Dublin in the Division 1 All Ireland competition, held this year in Kilkenny. This was a memorable weekend for both the team and the club, a weekend that saw the team win the coveted All Ireland Division One Feile Na nGael title and bring much acclaim to the club.

Much has been written on their achievement in winning this competition, however as noted above the team did not sit on their laurels, following the victory they got back very quickly to training and to continue their quest to achieve success in the Dublin football and hurling leagues.

The Division 1 football league is made up of 8 teams who play each other on a home and away basis. The standard of the football is high and the games are played at a hectic pace and very competitively. Saturday last, November 10th saw the team play their last game in the league, the team dominated the game for the start and they ran out convincing winners over opponents Clontarf. This left the team outright winners of the Division 1 League with 13 wins out of 14 and 5 points to spare over nearest rivals Ballymun Kickhams.

The Division 1 hurling league is made up of 7 teams who again play each other on a home and away basis. Again the standard of the hurling played is extremely high and games are fiercely competitive. Based on the teams All Ireland success and the quality of the teams they meet in this hurling league, the future of hurling in Dublin looks positive. The team’s final league game was played on Saturday October 13th at home against Kilmacud Crokes, The league title had effectively been won before this game so with little for Crokes to play for the Castleknock side ran out convincing winners. This left the team unbeaten in the league for the year and had 5 points to spare over nearest rivals Kilmacud Crokes.

Brian Cody summed up this teams qualities when he addressed the team before the Feile Final in Kilkenny he said “when I looked at you playing the quarter & semi finals I saw total commitment from everyone on the team, this total determination and effort is what I look for in any team I manage and this is what makes you different, the minute you stop this you just become an ordinary team”. Well this team took him at his word and did not become an “ordinary team”, they continued to work together and achieved a rare double in winning the both the Division 1 League titles.

This extraordinary team have had an exceptional year and have brought great pride to themselves, their families and the Castleknock Club. Great thanks must be extended to the continuous support they have received from their families, from members throughout the club and the local community and from the club itself.

Special mention should be made of the contributions of Maurice O’Shaughnessy and Robert Tierney on the hurling side. They were an inspiration to the lads throughout the course of the year, and contributed in no small way both to the Féile victory and the League win. Representing the wonderful Cork and Wexford hurling traditions they imparted a wealth of skill, awareness, stickwork and ball handling skills. We owe a great debt to their passion and commitment to the lads over not just this year but for quite a few seasons now.