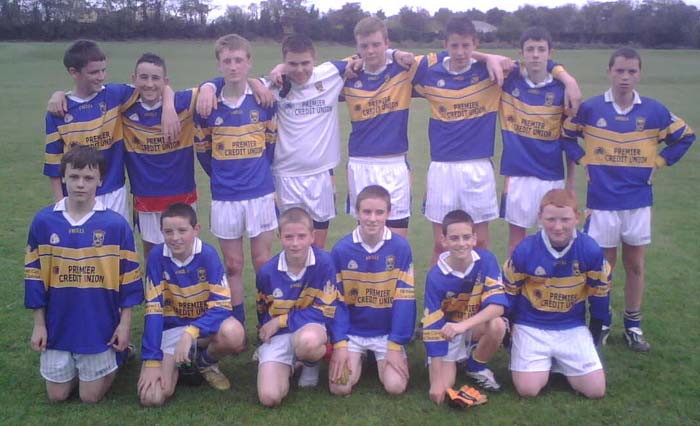 The under 14B panel played host to a team from Belfast on Saturday. The club Eire Og is based in South Belfast based in Dunmurray. Some interesting contrasts to Castleknock, they are in existence exactly 75 years and they have 90 members in their Juvenile section.

Their Under 14 team were travelling down to Dublin to support Ulster in the football inter-provincial finals. Their mentor Kieran McGarrity contacted us to request a friendly match as a prelude to their trip to Croker. We duly obliged and our welcome guests arrived in Castleknock at 2pm. Our match kicked off at 2:30 on a lovely afternoon in Porterstown. Joe Murray ‘Volunteered’ to be the official in charge. It was a tough task what with some cheeky comments from the home mentors as well as a lot of back chat from the home team’s full back. But he contended with it well and officiated what was a free-flowing attacking game of football.

Our visitors play Div 2 in the South Antrim league and had some classy players. But so have we, and after initial pressure from our Eire Og, Castleknock began to assert themselves. With Stephen Donaldson and Ciaran Boyle providing the point of attack, the home side were 3 points to 1 after 15 mins thanks to some fine point scoring from Conor O’Reilly and Shane Butler. It was a windy day so there were a lot more wides than scores,. But Eire Og are no slouches, they began to settle into the match and after some fine surging runs from their Midfielders they managed to get back into the lead after scoring a goal and two points. The game though was very even, and both teams traded two more points before half time, with Ronan Prunty and Mark O”brien causing all kinds of headaches for the Eire Og defense.

As the saying goes football can be a game of two halves, unfortunately we lost two of our forwards at half time, and Eire Og came out with all guns blazing. Their mid-fielders and half-forwards were on fire. They scored a couple of fine goals. What was really noticeable about some of their players was their great fielding and the ability to kick and solo with both feet. But our lads really battled hard and had goal chances of their own but unfortunately both shots blazed the wrong side of the post. We did though manage a few points with some fine scores from Kevin Balfe, Aidan Mcarthy and Shane Butler. The lads really worked their socks off with fine displays from Darren Keogh, Robert Wylie, and Joe Murray (apart from some cheek to the official in charge :-), )

The final whistle blew and brought an end to what was a fine game of football, played against really sporting opponents. After the obligatory photos, and some kind words from the Eire Og mentors, we headed back to the Carpenter to ensure our guests were fed and watered, before we sent them on their way to cheer on Ulster to victory in the Inter-Provincial finals in Croke Park

Michael, a chara
On behalf of Éire Óg GAC I just want to say a quick word of thanks to you and your club for hosting us in Dublin last Saturday. Our kids had a ball and really enjoyed the opportunity to play against your team. The hospitality that you and your club showed us was tremendous and I just hope we get the opportunity to repay your generosity. Your efforts and that of your club are at the heart of all that is good in the GAA and which makes it such a great organization. Once again many thanks, and as I said to you before we would be delighted if your club decided to pay us a visit to Belfast – perhaps when the Dubs take on the mighty Saffrons in the hurling and get a lesson in real hurling.
Is mise le meas
Ciarán McGarrity