Feile 2007 Finals - A supporters view from the bus window 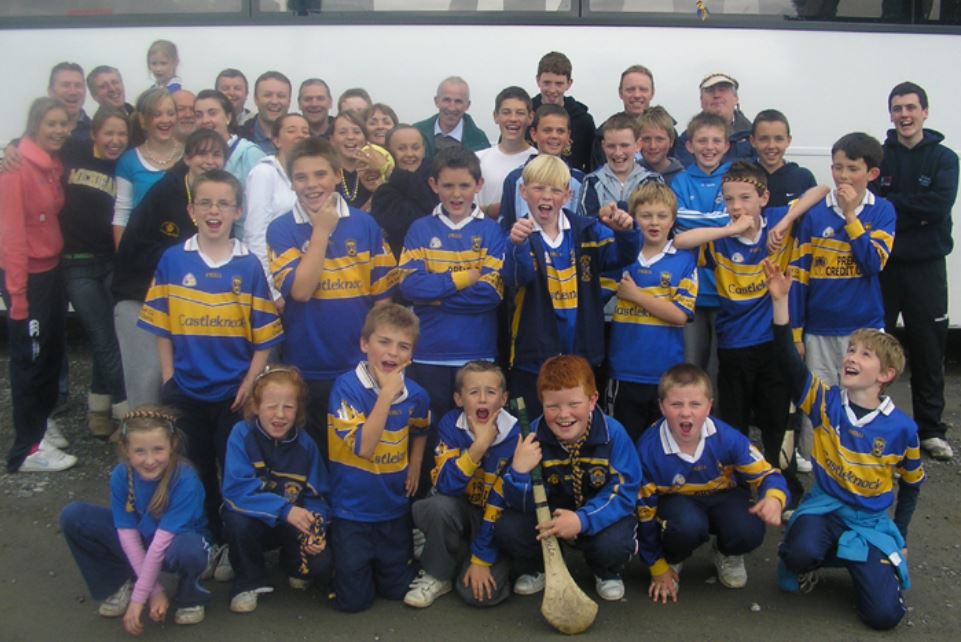 Feile 2007 Finals – A supporters view from the bus window

The weekly Juvenile Mentors meeting (Thurs nights at 9.30 in Church of Ireland Hall, Castleknock for those who have forgotten) is an important event in the clubs calendar. It is here that results are discussed, fixtures are finalised and important juvenile topics are discussed and agreed upon (or not as the case may be). It is also a place where, if you’re not careful, you can be ‘volunteered’ to carry out some club duties. This was the case about two weeks ago when Feile 2007 in Kilkenny was on the agenda. A bus was to be arranged for supporters…”that’s a great idea” I said naively, “OK Damian can you organise that so” said Eamonn Connor, Juvenile Chairman and hence word was out….a bus was going to Kilkenny contact Damian Whelan to reserve your seat !!

It wasn’t looking good early in the week. It appeared most people were choosing the peace and tranquillity of their car instead of travelling down on a slow bus with a bunch of screaming kids and teenagers (I wonder why ?), although those of us who travelled on the bus sought comfort in the fact that our carbon footprint was far smaller than those driving down in their ‘Gas-guzzlers’. Anyway I’m digressing here, back to the story. By Friday night the club rallied and the bus was almost full with 47 hardy souls booked.

The unusual sound of the alarm clock on Saturday mornings had me up early and standing outside CCC at 7.45…right lets hope everybody else’s alarm clocks were set. Surprisingly, first to arrive were a group of our U14 & U15 girls who somebody called ‘groupies’. We decided this wasn’t very complimentary so instead we christened them the Shane Boland Fan Club as they were all friends of the Feile team captain. Gradually the bleary-eyed coffee-wielding Castleknock faithful began to appear. 8.10am right we’re ready to go….hold on we’ve only 45 on the bus….who’s missing?…2 of our former minors….frantic phone calls….”Jesus lads are ye up yet ?”….”we’ll be there in 5 minutes”…8.25am another phone call…”I don’t believe you’re still in bed”….had to leave without them. “Do you know the way to Callan?” we asked Olegas, our bus driver from Lithuania, “Yes no problem” he said confidently (A satellite navigation system can give you that confidence), the bus finally departs at 8.30. Still plenty of time, our first game is not until 11.15.

The Castleknock faithful was made up of a diverse mix of club members and non-members. Ranging in ages from 7 to Ollie Coffey’s age (you can ask him yourself…if you dare!). We had the aforementioned Shane Boland Fan Club, 3 members of our Camogie U8s, 6 members of our boys U10s and their Dads, 8 members of our U11 boys and their Dads, 2 or 3 U13 boys, 2 or 3 U14 boys, 3 or 4 other boys who weren’t members of the Club but who had friends playing. We even allowed a member of St Brigids Minor team to board the bus….we wont mention any names for fear of embarrassment…you know who you are ! ps We are lucky to have such nice kids in our club…they were all impeccably well behaved all day.

After a tight squeeze through the streets of Callan we finally arrive at John Locke Park at 10.45. Grand, time for a cup of tea and a sandwich from our welcoming hosts before our first game. The youngest members of our touring party, Aoife Whelan, Fionnuala Doherty and Eleanor Doherty, to their delight, spotted a playground just beside the pitch and were off. ‘I could have left them in Riverwood playground’ said Pat the puzzled father of two of the girls…kids will be kids ! . While the younger ones were spotting the playground, U10 mentors Pat McDonnell and Martin Keane went on a recon mission to find a suitable hostelry to feed the masses . They were back in time for the first game at 11.15.Game 1 over…good win…sets us up for clincher with Ballyea. Game 2…even better win…we’re into the Quarter-Finals against Blackrock (No, not the rugby playing crowd from South Dublin – the Cork Champions). Where is the game on ?….Tullaroan…how do we get there ?…not to worry Olegas’s Sat Nav will find it. “Olegas, we’re going to Tullaroan. Key it into your Sat Nav and we’re sorted”….what cant find it ??…not to worry we’d fill our bellies first and think about it then. Better check the young ones in the playground…needn’t have worried, the Shane Boland fan club were looking after them.

The Big Wheel is a nice, cosy, quiet pub in the middle of Callan. Well it was until Saturday 16th June at 2pm when it was invaded by the starving masses from Castleknock. 15 chicken nuggets and chips, 1 beef stir fry (they only had one left!) 7 curries and whatever boiled bacon you have left we’ll take it. To say we ate them out of house and home is a slight understatement, the poor girl behind the bar looked shell-shocked when we left at 3pm.

Right now lets get to Tullaroan, kindly a young man (who’s name I cant recall) from John Lockes came on the bus with us as navigator and we were in Tullaroan by 3.30. Lovely pitch, beautiful backdrop, but tough opposition in the shape of Blackrock, the Cork Champions. 4pm the game is underway, but hold on…the game is stopped….is it a bird?, is it a plane?, no it’s Nicky Brennan arriving by helicopter…game restarts…YES another victory we’re through to the semis. Jesus there’s Brian Cody…quick get the camera…Brian, any chance of a photo ?…Brian….Brian….where did he go ? ah not to worry we’re in the semi-final.

Hold on a minute, bus has to be back in Dublin by 8pm, semi starts at 7.30 pm…we’ll never make it. It was then Eamonn Connor and Eugene Treacy displayed their diplomatic skills by persuading Olegas to delay our return to Dublin so we could watch the semi-final. Irish – Lithuanian relations were never as cordial when the supporting masses were told…. now is everybody ok with staying ?…ring your parents, wives, girlfriends, probation officers, whoever and tell them you wont be home until 11pm. After lots of grovelling to the WAGs on the phone we’re off again back to Kilkenny City and St Johns Park. No need for Sat Nav this time, a straight run into Kilkenny. Deadly.

Arrive in St Johns Park at 6.45pm.Great we have time for some refreshments before match. Tipp v Limerick on the telly, Tipp off to a flyer…don’t care, not interested in that Mickey Mouse Munster Championship….All-Ireland Feile is where it’s at and the semi-final is just about to start. “Jesus we’re in the wrong place” says Ollie “that’s John Lockes who just ran out”…”No, we’re wearing their jerseys because of a clash with St Rynaghs” said the ever sensible Jim Mahony.

I know this was a tough game for the players, but the supporters found it tough too. You could sense the tension among the faithful, it was almost like being on the Hill when Dublin take a 5-point lead with 10 minutes to go. 4 points up at half time….supporters happy yet nervous…second half underway…oh no Rynaghs score a goal…poor Declan was aging before our very eyes !!!. “Come on lads…we have the heart !!” said the teams coach Maurice…”Jesus I don’t think mine will last till the end of the game”…said one of the faithful. Final whistle…YEESSSS!….pitch invasion…hugs all round….nerves shattered. One of the faithful then light up a cigarette and was spotted by eagle-eyed u11 Adam Coffey “I never knew you smoked when did you start smoking ?” “about 5 minutes ago” came the reply.

Ok we’re in the final now, can we find somewhere to stay ?…Olegas can you stay until tomorrow ?…can we sleep in the bus ?….cant miss the final !. It was decided to go home and re-group for Sundays final.

We were mentally and physically exhausted at that stage (I can only imagine how the players must have felt) and so we gathered our tired and huddled masses back on to the bus. Nick Boland then came onto the bus and thanked everybody on behalf of the team for travelling down and supporting the lads. Needless to say he got a great cheer.