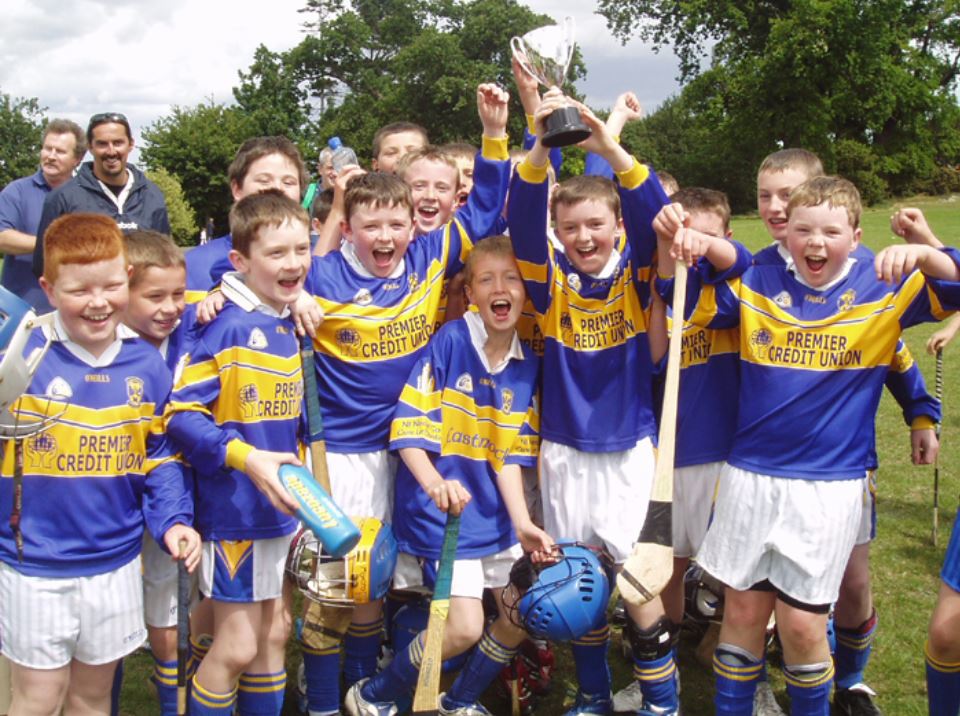 After achieving a momentous victory over St Vincent’s in the League Semi-Final, Castleknock U12B hurling team were drawn against our neighbours St. Peregrines in the Final. A local derby against two Dublin 15 clubs was sure to draw a big crowd….until the County Board intervened and decided to locate the fixture in Kilmacud!!

Undaunted the panel assembled at 10.15am (10.35am for the McCaffrey’s!) and headed Southside for battle. 50 minutes on the car park known as the M50 is not a well known pre-match warm up in Kilkenny, but we all arrived safe with our passports stamped.

With their usual attention to detail the County Board arranged for 4 other Northside teams to play alongside us, probably just to make everybody feel at home.

As this was Peregrines only team we knew we were up against it, particularly as injuries meant that our squad was supplemented by U11 assistance.

From the start it was clear that Peregrines meant business and gave a great lesson in blocking and hooking, but they hadn’t reckoned on Dylan Singleton’s determination to win a medal before his transfer to Algarve Gaels.

Dylan’s partner in crime in midfield was Darragh McCaffrey who had come so far south he felt that he was playing in his native Cork. Behind midfield was a wall of steel in the shape of Kevin Cassells, Colm Peelo and Luke Lynam. Their motto was ‘If it was small and white hit it’, which was unfortunate as the opposition chose to wear their home colours for the day.

Aodhan Peelo, David Connellan, Luke Whelan and Andrew Daly in the forwards, harried and hussled the Peregrines defence all day waiting for their opportunity.

The first half finished with tremendous team play from Tom Byrne to Eoghan O’Sullivan to Michael Boland who finished the move with a rocket to the top corner. 1.01 to 0.01 with all to play for.

Playing against the wind and up the hill in the second half we expected an onslaught and so it came. Our last line of defence was Terry Sheridan, Alex King and Alex (the Cat) Hannigan in goal. All three played like they were possessed by demons, and Peregrines must have wondered what they must do to convert their possession into scores.

Against the run of play Colm Peelo who having recently found the other side of his hurl and thumped the sliothar to Dylan Singleton. Dylan burst forward and passed unselfishly to Tom Byrne on the wing, who rifled the net from 20 yards.

In fairness Peregrines never gave up and fought until the end. Our last goal was a scrambled affair which was claimed by most of the panel, a few substitutes and some of the parents. The final whistle sounded with Castleknock the victors 3.03 to 0.03.

Thanks must also go to the four U11’s who made themselves available on the day and blended in like they were always there. They were Luke Whelan, Darragh Conway, Jordan Toland and Alex Hannigan, all a credit to Castleknock.

A special thanks must go to the Mentor Nick Boland who has stuck with this team through thick and thin, despite other minor distractions like winning Féile!

A final thanks must also go to the U12B’s Cheerleaders who may not be the youngest cheerleaders, but certainly are the loudest, (you know who you are!).