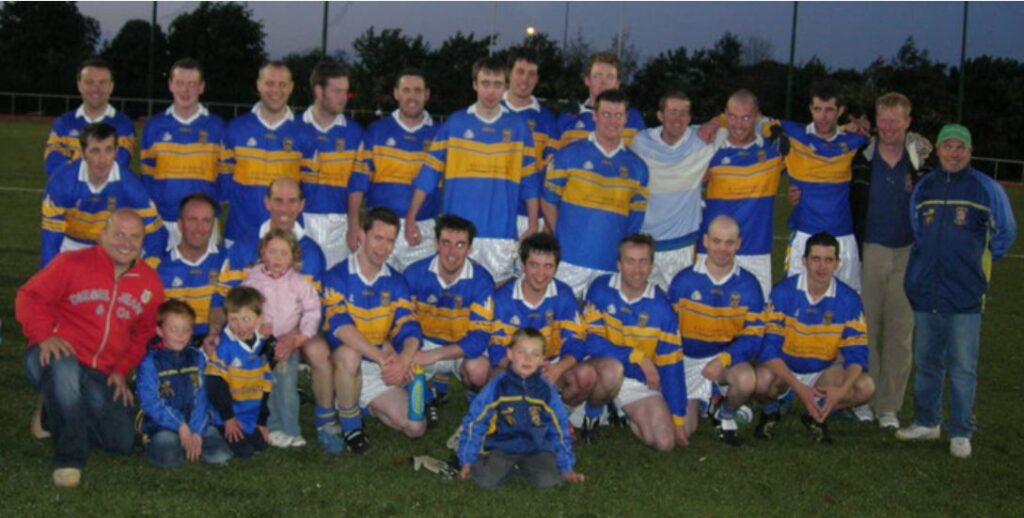 Frank Dardis has finally got a drinking buddy and his name is Mr Duffy!!!! Thanks to the magnificent victory by Donal Cunningham’s Killer Bs on Monday night in Russell Park, the Duffy Cup will now sit proudly alongside the Frank Dardis Cup in the Castleknock trophy cabinet.

After their hard earned victory over Na Dubh Ghall in the semi-final Castleknock faced Brigids in their backyard for the honour of winning the Duffy Cup. A large crowd gathered in Russell Park for the occasion. Mick Stokes was a late withdrawal due to an injury in the warm up but Castleknock still lined out with a strong team and made short shrift of playing against the wind in the first half.  Cathal Gallagher and Deco Mahon were showing well for the ball on the forty while Eoin Dineen and Danny Stewart anticipated any Brigids attacks. James O’Connor had his hands full with the giant Brigids full forward and despite being beaten by pace to the ball a few times O’Connor stuck to his task manfully.

It took a while for the first score to come as both teams took time to adapt to the swirling wind. Brigids got the first score from their skilful centre forward while Castleknock worked the ball short through quick hands to create some openings up the far end but struggled to hit the target. They opened their account through the boot of Cathal Gallagher who would go on to have a mighty game.

Castleknock then kicked on and plundered a goal. The white gloved wondrous winger Warnock received a ball on the 21, evaded the Brigids challenge and slipped the ball between the keeper’s legs to put Castleknock in the lead. The Warnock fella caused panic in the Brigids rearguard again as he fielded another long ball and was pulled down in the square just as he was about to pull the trigger. The ref pointed to the spot and Deco Mahon banished his penalty miss blues by sending the keeper the wrong way and burying the ball to his right with such power that it rebounded off the stanchion and also whacked Tutts in the face. Stick that in your pen pic pipe and smoke it!

Tutts was then denied a perfectly good point by two biased umpires as they waved it wide as wides would be totally alien to the scoring machine that is the Tutty fella. Deco closed out the scoring for Castleknock in the first half with a free. Although Brigids had landed a few scores in the meantime, they were been harassed and harried at every moment by Darach Mac, Evergreen Alfie and Shane Reilly.

Castleknock had one hand on the cup now they were playing with the breeze but Brigids showed some fight with the first score of the second half. It was time to roll up the sleeves and Keith O’Brien and Darach Mac began to work in harmony in midfield to play some fine balls into the forward line. Tutts was showing for everything determined to break his scoring duck. One such hassling of a corner back by himself and Warnock resulted in a hurried clearance which Cathal Gallagher caught acrobatically with one hand and in the blink of an eye had it sailing over the bar from 30 yards.

Castleknock had the game by the scruff of the neck and drove on relentlessly with Danny Stewart dominating his wing and Keith O’Brien marshalling the middle. Gallagher again popped up for another wonder score after bending the ball off the outside of his boot over the bar from the right sideline. Memories of a young John Corkery. Brigids were finding it tough especially against the wind and any attempted inroads were snuffled out by a dominating backline.

Then super sub Tony Corcoran came on and straight away he latched onto a long ball, turned and shot just wide. It was an omen of things to come. Tony worked the next ball with Tutts, a quick one two and boom! the ball was rifled into the roof of the keeper’s net. However he wasn’t finished. Another run through the Brigids rearguard resulted in a spilled ball and Corcoran bundled it over the line to complete a memorable five minutes. The brother Rory better hurry up with the exams or Tony will be taking over his place in the first team.

It was all over bar the shouting and Tutts finally got his wish when sailing over a beauty to complete a fine display for the Castleknock men. So congrats to the Killer Bs as well as to Donal Cunningham and John Corkery. A fine achievement for the lads and hopefully league and/or championship honors will come their way this year!!

Alex Griffith
To Tee or not to Tee that is the question. Young Alex has leapt straight out of minor and has produced some sterling displays for both adult teams. Never a man to rush himself when everyone is going bananas, his long kickouts will be vital in this final

Shane Reilly
Teak tough defender who returns to his alma mater for the final. Was unfortunate with injuries but playing a key role in Donal’s team as the old head in the back line. Usually seen in the Longford GAA hospitality tent at race days.

James O’Connor
Or Connorz as he likes to be known. After coming on leaps and bounds due to running a marathon every day. Best friends with Halle Gabresallasie. It’s a testament to him that he’s keeping Shane Reilly in the corner. However if there was work in the bed, he’d sleep on the floor.

Noel McCrory
The wee man from the north goes about his business effectively in the corner. Becoming a bit more vocal now that Donegal eventually managed to win a final.

Danny Stewart
Should change his name by deed poll to Peter Mark as he has more hair products than a hairdressing convention. Another kid straight out of minors who is well comfortable on the ball. . Wears two types of hair gel – one for the top and one for the sides. Has to remove three ounces of jewellery before every game.

Eoin Dineen
Another young gossen from the minors who Cunningham is attempting to groom in his own image. God help the poor lad.

Alfie ‘Double Tops’ Sawyer
The heartbeat of the team just turned forty last weekend with a massive soiree in Castleknock tennis club. The only deuce he was on however was of the orange kind. Will be driving the team on at every opportunity and will lead by example.

Keith O’Brien
Another man who will be filling the valuables bag up along with Danny Stewart. Himself and Gerry Kelly have hired an agent for the amount of TV work they’re doing. Don’t worry if you think the sun is in his eyes or not when he’s going for a ball, he’ll let you know all about it.

Ger Geraghty
Another minor earning his corn in Donal’s team. A great man to have on your team for the table quiz. If he keeps growing at this rate Mick Lynch will have to put a skylight in the dressing rooms.

Deco Mahon
Freeman of Castleknock as in this boy will nail frees over the bar anywhere within 50 yards of the opposition’s goal. Has a great eye for goal although penalty taking is in the Chelsea Champions League semi-final bracket. Sports a fancy pair of cycling shorts under his togs.

Brian Farrell
Should possibly be rechristened Colin as he shares the Castleknock actor’s finest Dublin brogue. Made the move from O’Connells last year for an undisclosed transfer fee. You wanna know who’s sitting 8th in Adult Division 10? Ask this geezer.

John Greene
Despite Greeney being told to rule himself out for the season due to injury he has battled back to put in some fine performances for the Killer Bs. Also gained a handsome Dublin accent which happily replaces the Roscommon twang we’re so not used to. Looking slim as ever too.

Niall Tutty
The lean mean scoring machine. Thinks “head up” is a new type of shampoo. When on the ball he dazzles, when off it he fouls. Reduction in air miles has now meant a more concentrated effort for the money man of the club. Still trying to get Bertie to give back that 30 grand for stamp duty.

Mick Stokes
Hurling’s loss is football’s gain. The big man from Limerick is the goalgetter and play buster upper. Sports a nice line in pink shirts at various dinner dances.

Paul Warnock
Weighs in with his fair share of scores but doing most of his best work at underage level coaching the kids. No matter how warm it is he’ll be wearing the monster white gloves.

Tony Corcoran
Gives it his all for the team but disappointing not to see him sporting the smig or the eminem look anymore. Guess who’s back? Tony’s back…..

Darach MacNamara
Flu has prevented the big man from togging out recently but what does he expect when he’s trying to chat up junior briefs in a cold and dusty law library. A kilo of uniflu will be necked between now and then to ensure he makes the final.

John Corkery
Brings a fountain of knowledge and piseogs from the kingdom for the benefit of the club. Recipient of club point of the century award. Lets hope we see the Corkery shake’n’shuffle at the final whistle.

Donal Cunningham
The gaffer. Has built this team from the bottom up and will probably destroy it too! Hates lads drinking after games. Some man to ring you and then cut you off in the middle of a conversation to tell you ‘he’s busy’. Doing Trojan work for the club. Currently building an empire with Seamus McKiernan.